Talented crochet teacher on a mission to teach the world to crochet.

I never set out to create crochet as a form of therapy but looking back, being able to crochet has helped me through some hard times.

I have mentioned many times before how I learned to crochet in 2013 after my second child was born. My first two children were born just 16 months apart. I was used to being busy and having tasks to work on as a busy primary school teacher. For 10 years, ‘teacher’ was my identity and I loved it. So being at home with two babies, exhausted, isolated from my normal life felt very different. I took to being ‘mum’ straight away, it was the one thing I had wanted all of my life but had lost any sense of doing something for me. I knew I couldn’t get to a class with a toddler and a newborn in tow and I knew I was too tired to get out in the evening to a class. I think I had seen Kirstie Allsopp mentioning crochet on one of her craft shows but I had never heard of it so I decided to give it a go and pushed aside my other ideas of learning an instrument, language or calligraphy (I still want to learn all of those!).

That was the first time crochet ‘saved’ me. I had a hobby, something to look forward to when the kids were in bed, something I could pick up and put down easily if they needed me, something to do while Peppa Pig took over, something that was just for me with the added bonus of creating gorgeous things, which unexpectedly became my business.

A few years later I got a phone call from my dad telling me that my cousin had died by suicide. She was just 27. A bright, beautiful, charismatic, intelligent, creative soul. When she was a baby, I remember just holding her in my arms feeling her wiggly warmth. She loved festivals and spent hours holding my own baby at Glastonbury Festival where we hung out one summer. (Yes, I took my 5 month old baby to Glastonbury but that is another story!).

I had read about a crochet designer called Wink who was designing a blanket but never finished as she too died by suicide. A bunch of other crochet designers got together to finish her design and released it as crochet-a-long (CAL). This project resonated with me so much that two of my cousins and two of my aunts joined the CAL and we poured our grief into those stitches. During that time I was horrified to hear just how many people have friends or family members who have died by suicide. My monthly donation to Mind will never be enough but goes a small way to helping people.

I originally set up my business in 2014 but when I returned to primary school teaching in 2018 I had to let the business go into hibernation. I could never quite close it but it was inactive during that time. My third and youngest child had just started in reception so I felt it was time to get back into teaching. Sadly, because the teaching landscape had changed so much since I had started out in 2002, and because I had my own children I wanted to see, being out of the home before they were awake and returning in a shattered, exhausted state, I no longer got the same joy from teaching I once did. In fact, I started to notice some pretty worrying signs; heart palpitations, hair loss, weight gain due to using food as a reward for surviving the day or as a pick-me up mid-way through, using alcohol to switch off, and thoughts of making myself ill to avoid going in. I recognised that wishing a broken leg upon myself was not a healthy way to be thinking and thoughts of my cousin’s suicide meant I knew I had to leave teaching. Desperate job searches didn’t help so instead I worked with a business coach, Ellie Baker, who helped me see that I could rekindle my business and get back to teaching crochet (she has an epic 12 week course which I highly recommend if you want to start your own online business). So that was that, I worked my socks off to build my website, design my crochet course and work with people who wanted to experience the same mindful benefit that I get from crochet.

I left teaching in July 2021 but still get to work in schools part-time in a different role – capturing all of the exciting events that are taking place and sharing that with families on the schools’ social media channels and website as a Marketing and Communications Officer.

I’m in a much happier and mentally healthy place. I get to take my children to and from school twice a week and I’m no longer permanently shattered and stressed making me a better mum. I get to be my own boss and working on my business never feels like a chore even though I work myself so hard!

So that’s it, three times crochet saved me. I would love to hear how a hobby has helped you through some dark times. 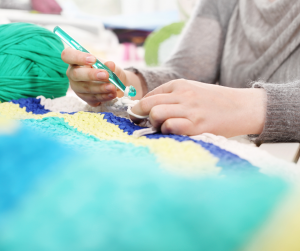 Crochet at work Did you know that alongside individual crochet courses I offer workplace wellbeing sessions too? Using the wonder of technology 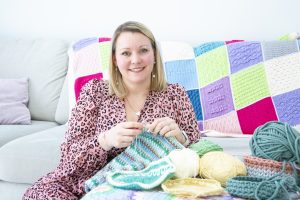 Welcome to May! Such a lovely month with the promise of summer even nearer. My youngest son has his birthday this month 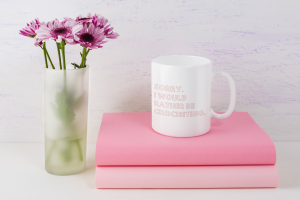 How do you buy gifts for Crafty people?

How do you buy gifts for crafty people? Crafty people like crafty things but how do you know what to get them

We use cookies on our website to give you the most relevant experience by remembering your preferences and repeat visits. By clicking “Accept All”, you consent to the use of ALL the cookies. However, you may visit "Cookie Settings" to provide a controlled consent.
Cookie SettingsAccept All
Manage consent

This website uses cookies to improve your experience while you navigate through the website. Out of these, the cookies that are categorized as necessary are stored on your browser as they are essential for the working of basic functionalities of the website. We also use third-party cookies that help us analyze and understand how you use this website. These cookies will be stored in your browser only with your consent. You also have the option to opt-out of these cookies. But opting out of some of these cookies may affect your browsing experience.
Necessary Always Enabled
Necessary cookies are absolutely essential for the website to function properly. These cookies ensure basic functionalities and security features of the website, anonymously.
Functional
Functional cookies help to perform certain functionalities like sharing the content of the website on social media platforms, collect feedbacks, and other third-party features.
Performance
Performance cookies are used to understand and analyze the key performance indexes of the website which helps in delivering a better user experience for the visitors.
Analytics
Analytical cookies are used to understand how visitors interact with the website. These cookies help provide information on metrics the number of visitors, bounce rate, traffic source, etc.
Advertisement
Advertisement cookies are used to provide visitors with relevant ads and marketing campaigns. These cookies track visitors across websites and collect information to provide customized ads.
Others
Other uncategorized cookies are those that are being analyzed and have not been classified into a category as yet.
SAVE & ACCEPT